The 2017 Breeders’ Cup will be staged at Del Mar for the first time in the history of the event. The course is a sharp oval track of just under a mile. That means it is even tighter than Chester so should suit the sharper horses more than the big long-striding runners. A strong European raiding party is guaranteed with their best chances lying in the turf races.

Aidan O’Brien has enjoyed a fantastic season in Europe, surpassing Bobby Frankel’s record of 25 Group 1 wins. He now sets his sights on the Breeders’ Cup and has excellent prospects in Friday’s Juvenile races.

Ballydoyle could be doubly represented in the Juvenile Fillies Turf with September and Happily. The latter missed her engagement in the Fillies’ Mile at Newmarket. She already has two Group 1 victories to her credit, most recently in the Grand Criterium at Chantilly. September took her chance at Newmarket and was only beaten a nose by Laurens. She has been a model of consistency since winning at Royal Ascot in June.

O’Brien has switched US Navy Flag from the Juvenile Turf to the Juvenile Dirt. That leaves stable companion Mendelssohn to contest the Turf after finishing second in the Dewhurst. This has been the target for James Garfield since finishing second at York in August. George Scott’s colt then won the Group 2 Mill Reef Stakes at Newbury in good style.

Friday’s action also features the Breeders’ Cup Distaff where Stellar Wind is likely to start favourite. She was runner-up in 2015 and fourth last year.

The Turf Sprint on Saturday sees French ace Lady Aurelia renew rivalry with Nunthorpe Stakes conqueror Marsha. Frankie Dettori was convinced that he had held on aboard Lady Aurelia and celebrated prematurely. The photo-finish went in favour of Sir Mark Prescott’s filly. John Velasquez takes over the reins on Lady Aurelia this weekend. Marsha has since been beaten at Chantilly on soft ground but conditions will be fast at Del Mar.

O’Brien could run both Rhododendron and Roly Poly in the Filly & Mare Turf. The former was runner-up in the 1000 Guineas and the Epsom Oaks. She thoroughly deserved her brave win over Hydrangea at Chantilly last time. Roly Poly won the Sun Chariot Stakes at Newmarket from Persuasive, her third Group 1 victory of the season. She ran moderately at the Breeders’ Cup last year and this comes at the end of a long season. I prefer the chances of Queen’s Trust who bids to retain her title for Sir Michael Stoute. She loves to hear her feet rattle and has not really had her ground in Europe.

Richard Fahey’s Ribchester will attempt to end his career on a winning note in the Breeders’ Cup Mile. He has had his colours lowered twice this season in the Sussex Stakes and the QE II at Ascot. Churchill has not really progressed since landing the English and Irish Guineas.

With Churchill, Roly Poly and Decorated Knight all having alternative engagements, Suedois could run well here for David O’Meara. The six-year-old has been a revelation since stepping up to a mile and won the Group 1 Shadwell Turf Mile last time out. 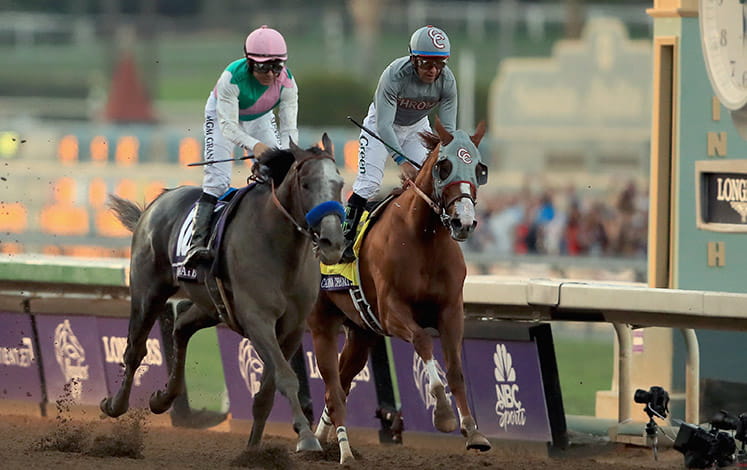 Highland Reel was a brilliant all-the-way winner of the Breeders’ Cup Turf last season where he had Ulysses back in fourth place. He ran an eye-catching trial when third in ground much softer than he likes at Ascot recently. Ulysses has improved this season, winning the Eclipse and the York International. He finished third in the Arc last time but that race can sometimes leave its mark.

The climax of the evening is the Breeders’ Cup Classic with Arrogate also set for his swansong. He famously won the race last year to establish himself as the top rated racehorse in the world. The brilliant winner of the inaugural Pegasus World Cup followed up in the Dubai World Cup. He has suffered two shock defeats since, coincidentally both at Del Mar. Gun Runner was no match for Arrogate in Dubai but has won all three subsequent starts easily. He can be ridden from the front or settled in behind and looks nailed on to reach the frame.