The Betway Lincoln Handicap is the traditional curtain-raiser to the new flat turf season at Doncaster. The race is run over a straight mile, often on soft ground where the draw can prove decisive. A low draw is usually an advantage in testing conditions.

The last winning favourite in the Lincoln was Penitent for William Haggas in 2010. The average SP of the winner over the last six years has been over 16-1. Richard Fahey has trained the winner twice in the last five years with Brae Hill (2012) and Gabrial (2015).

Favourite Morando Out of Lincoln Handicap

Bookmakers are already ahead on the race following the late withdrawal of ante-post favourite Morando. The four-year-old gelding is trained by Roger Varian who reported that he would miss the race on Thursday morning due to a minor injury. He won handicaps at Chester and Ayr last season before finishing seventh behind Yuften at Ascot in October.

Yuften was set to meet Morando on only 1lb worse terms and represents Roger Charlton with William Buick in the saddle. He was gelded during the winter and returned to action with a good run at Lingfield on the all-weather. Yuften was a high-class three-year-old when trained by William Haggas and was second in a Group 1 in France.

The top weight is Battle Of Marathon, a five-year-old gelding trained by John Ryan. He was placed in a Group 2 as a two-year-old and was beaten by only three-quarters of a length in this race last year. This will be his first start since finishing tailed off at Ascot in July.

Jamie Spencer rides Donncha for Robert Eddery, a six-year-old by Captain Marvelous out of a Generous mare. He was beaten by a neck in the Spring Mile at the corresponding meeting last year. He was subsequently placed in competitive handicaps at Sandown and Goodwood but is only 3lbs higher in the weights. He has been drawn in stall 21 of 22, which is far from ideal.

Richard Fahey saddles five horses here including previous winner Gabrial. The talented gelding has only won once in 27 subsequent outings but has kept his owners in clover by placing in Group races. He is 8lbs higher than when he was successful in 2015. 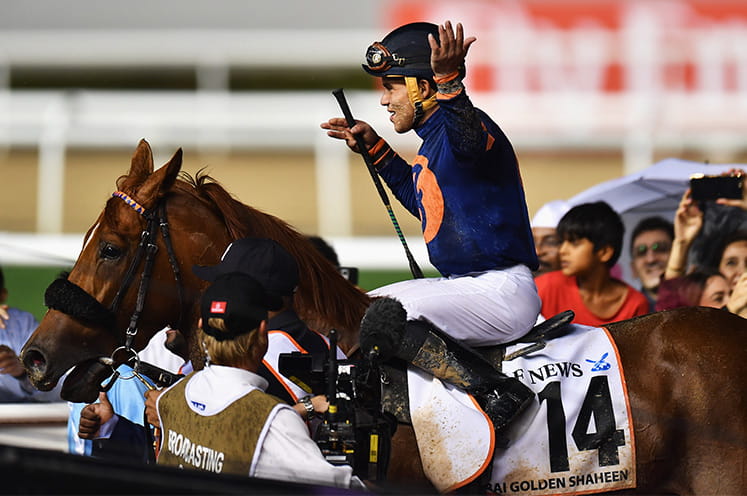 Stable companion, Third Time Lucky, won the Cambridgeshire in 2015 and finished a respectable fourth in the same race in September. He has been sharpened up on the all-weather but is 11lbs heavier than when wining at Newmarket. He will start from stall one and Connor Murtagh claims a useful 7lbs off his back.

Ryan Moore Booked for Oh This Is Us

Paul Hanagan has been re-united with Fahey this season after his split from Sheikh Hamdan Al Maktoum. He has chosen to ride Dolphin Vista, a four-year-old gelding by Zoffany. He won at Beverley in August before finishing fifth at York in October.

Ryan Moore rides Oh This Is Us for Richard Hannon, the winner of five of his fifteen races to date. He would probably be suited for faster ground but is fit after a spell in Dubai. He caught the eye last month out when finishing strongly in fifth place over seven furlongs.

Top Notch Tonto is now seven years of age and has slipped down the weights. Brian Ellison has booked 7lbs claimer, Ben Robinson, to ride the popular gelding who last won at York in June 2015. He likes to get his toe in and should have conditions to suit on Saturday.

David O’Meara saddles an interesting runner in Bravery, formerly trained by Aidan O’Brien. He ran in the Irish 2000 Guineas and the French Derby last season. He has been tried over longer trips without success but a change of stable can sometimes bring about an upturn in fortunes.

The Betway Lincoln Handicap is due off at 3.35 on Saturday 1st April and will be televised live on ITV4.