The big race at Haydock Park on Saturday is the £75,000 Grade 3 Betfred Grand National Trial over three and a half miles.

The race was previously known as the Greenall Whitley Gold Cup and has long been recognised as a trial for the big race at Aintree. The most famous winner was triple Grand National hero Red Rum in 1975 who defied top weight of 12 stone.

Party Politics won this race in 1993, a year after his Grand National triumph. Cool Ground (1992) and Master Oats (1994) won the Cheltenham Gold Cup while other notable winners include Andy Pandy (1977), Twin Oaks (1991), Suny Bay (1997), The Last Fling (2000) and Forest Gunner (2005). Lucinda Russell has trained the winner three times in the last seven seasons while Kerry Lee won it last year with Bishops Road.

Lee relies on Goodtoknow at Haydock

Bishops Road will not be lining up on Saturday but Lee still has a live contender in Goodtoknow. The nine-year-old son of Presenting easily beat stable companion Mountainous by seven lengths on his last outing at Hereford at the start of the month. He incurs a 5lbs penalty for that success but looks a progressive chaser. He had previously chased home One For Arthur when fitted with blinkers for the first time at Warwick.

Nigel Twiston-Davies saddles top weight Blaklion, an eight-year-old gelding by Kayf Tara. He was a tough and consistent novice last season, winning the Grade 1 RSA Chase at the Cheltenham Festival. He has not quite proved up to Gold Cup class this season but was not disgraced last time out behind Definitly Red at Wetherby.

Philip Hobbs will be represented by Kruzhlinin, a ten-year-old gelding by Sholokhov. He won the Fixed Brush Hurdle at Haydock in November before finishing second in a handicap chase at Kempton last month.

David Pipe’s Vieux Lion Rouge finished a remote seventh in last season’s Grand National at Aintree behind Rule The World. He weakened at the second last but it was still a creditable effort from the 66-1 chance.

He returned to Aintree in December where he battled on bravely to beat Highland Lodge by a short-head in the Becher Chase. He clearly has a liking for the Aintree fences but also has winning form at Haydock and looks to have solid each-way claims this weekend.

Tour Des Champs sprang a 50-1 surprise when beating Pipe’s Doctor Harper by a short-head at Cheltenham on New Year’s Day. That was his first run since April last year when pulled up in the Scottish National. The ten-year-old has gone up 8lbs in the weights and it will be a surprise if he can repeat the performance on Saturday. 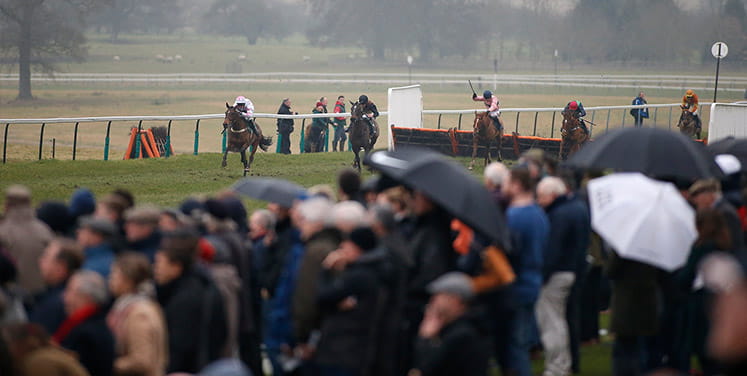 Venetia Williams trained the winner of this race in 2014 with Rigadin De Beauchene. She had four entries this year but relies on Houblon Des Obeaux, placed in the Hennessy Gold Cup at Newbury back in 2014. He was third to Native River in the Welsh National in December before finishing fourth to One For Arthur at Warwick. He looks held by Goodtoknow on recent form and may need to drop a few pounds in the handicap.

Sue Smith’s Vintage Clouds is difficult to win with and has finished runner-up in his last six completed races. He has come up against some useful opponents including Cheltenham-bound Politologue here in November. He was beaten in third place when falling behind Bristol De Mai over three miles here in soft ground last month.

The Betfred Grand National Trial is due off at 3.10 at Haydock Park on Saturday 18th February and will be televised live on ITV4.