The weights for the 2018 Grand National were announced on Tuesday and punters get their first look at ante-post favourite Blaklion at Haydock on Saturday.

Blaklion on Trial for Aintree

TNigel Twiston-Davies, successful in the Grand National with Earth Summit (1998) and Bindaree (2002), believes that Blaklion can bring him further big race glory.

The nine-year-old won the Grade 1 RSA Chase at Cheltenham as a novice in 2016. He finished runner-up to Vieux Lion Rouge in the corresponding race last year before finishing fourth in the Grand National. He started favourite that day and Noel Fehily let him bowl into the lead almost a mile from home. Twiston-Davies feels that he would have finished closer, had his rider delayed his challenge.

Blaklion has put in two excellent performances already this season. The son of Kayf Tara was narrowly beaten by stable companion Bristol De Mai at Wetherby in November. He then won the valuable Becher Chase at Aintree by nine lengths in heavy ground. He won’t be troubled by the similarly testing conditions at Haydock but has been put up 8lbs for his victory.

David Pipe trained Comply Or Die to win the 2008 Grand National under Timmy Murphy. He had high hopes for Vieux Lion Rouge last season but the gelding could only finish sixth behind One For Arthur. That was one place better than in 2016 but his two outings this season have been disappointing. He was taken out at the final declaration stage with Pipe relying on Daklondike who races in the same colours.

He is a progressive six-year-old, winner of his last two starts at Wincanton and Newbury. The son of Gold Well showed that he can handle heavy ground when beating Grand Vision in the Mandarin Chase at Newbury in December. He has come under pressure a long way out in both of his recent victories but kept pulling out extra. The handicapper has responded by putting him up 7lbs on Saturday.

Colin Tizzard is represented by The Dutchman, an eight-year-old gelding by King’s Theatre. He emerged as a possible Grand National contender when sluicing through the mud to win the Grade 2 Peter Marsh Chase here last month. His supporters only had one anxious moment when he hit the second last fence. That was only his third start since joining Tizzard from Sandy Thomson’s yard in November. He faces a hefty 13lbs rise in the weights and will be partnered by Danny Cook.

Three Faces West fell at the twelfth fence when leading in the Peter Marsh. Philip Hobbs trains the ten-year-old, a winner on two of his previous three visits to Haydock Park. He is yet to win beyond three miles. 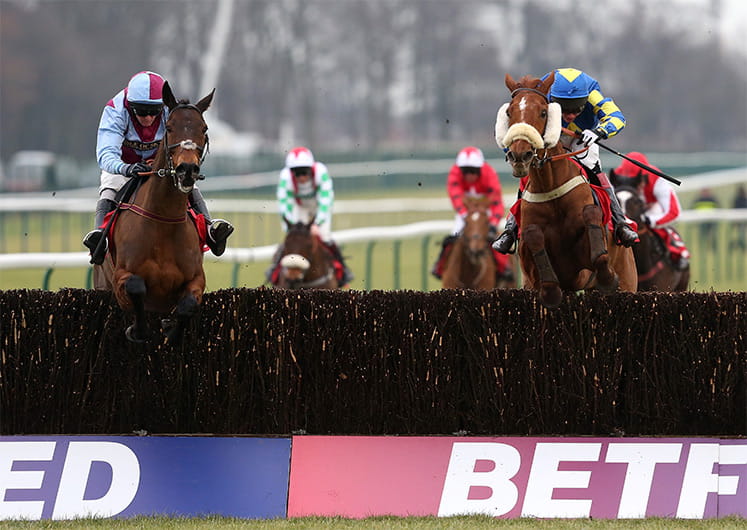 Wild West Wind blotted his copybook when falling in the Welsh National in January. He raced quite keenly but got no further than the twelfth fence. That could turn out to be a blessing in disguise as the Chepstow marathon is a particularly gruelling contest. The Westerner gelding has won in heavy ground and has been given a Grand National entry by Tom George. Mysteree is a course and distance winner but needs to bounce back from a disappointing run at Chepstow. Michael Scudamore sent him to the Welsh National without a previous run and he was never really travelling, eventually being pulled up behind Raz De Maree.

The Grand National Trial is due off at 3.15 at Haydock Park on Saturday 17th February and will be televised live on ITV4.