The feature race at Haydock Park on Saturday is the £200,000 Betfair Chase, the first Grade 1 chase of the new jumping season.

The Jockey Club is offering a £1million bonus for the connections of any horse that wins the Betfair Chase, King George VI Chase and Cheltenham Gold Cup. Kauto Star completed the hat-trick in 2006-07 and Cue Card came agonisingly close in 2015-16. The latter was still going comfortably when falling at the third last in the Gold Cup having already won the first two legs.

Kauto Star made the Betfair Chase his own, winning it four times between 2006 and 2011. Silviniaco Conti provided Trainer Paul Nicholls with his fifth and sixth victories in 2012 and 2014. Cue Card has won three of the last four runnings and will try to equal Kauto Star’s record on Saturday.

Paddy Brennan has been replaced by 19-year-old Harry Cobden this weekend. Brennan has ridden Cue Card in his last thirteen races but the gelding has fallen in two of the last three. The most recent of those was on his seasonal debut at Wetherby in the Charlie Hall Chase. He was upsides eventual winner Bristol De Mai when crashing out at the fifteenth fence.

Cue Card has won sixteen of his thirty-eight races and over £1million in prize money. Now aged eleven, he may be aimed at the shorter Ryanair Chase at the Cheltenham Festival in March. The third last fence caught him out for the second year running last season. The going is currently expected to ride heavy at Haydock and Cue Card won this race in similar conditions last year.

The favourite for the race is the soft-ground loving Bristol De Mai, trained by Nigel Twiston-Davies. The grey held off stable companion Blaklion to win the Charlie Hall by half a length when conceding 6lbs. He showed his liking for Haydock when romping to a 22 lengths success in the Peter Marsh Chase in January. Bristol De Mai took his chance in the Cheltenham Gold Cup but faded to finish seventh after a couple of serious mistakes. 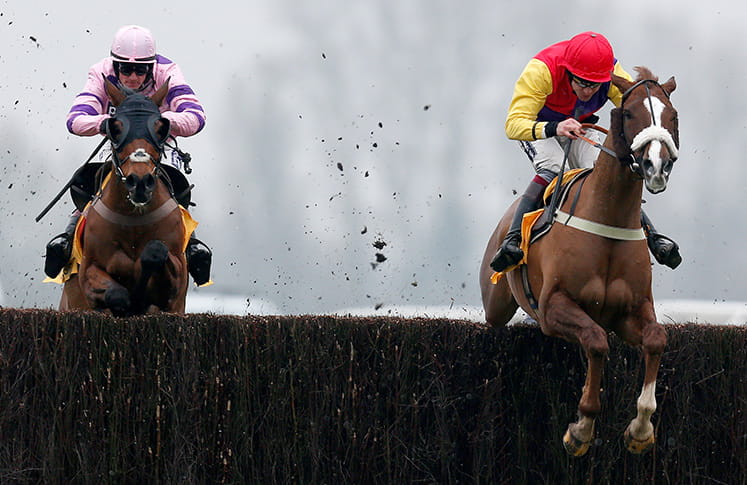 The son of Saddler Maker won by an even wider margin on his only previous visit to Haydock as a novice. That was also in heavy ground and he will love the prevailing conditions on Saturday. Daryl Jacob has ridden him in all but one of his fifteen races over fences and retains the ride this weekend.

Cheltenham Gold Cup winner Sizing John has been ruled out because of the heavy ground. That leaves Gordon Elliott’s Outlander as the sole Irish raider, the recent winner of the Grade 1 Champion Chase at Down Royal. The son of Stowaway has disappointed on all three visits to Cheltenham in recent seasons, including when finishing tenth in the Gold Cup.

Tea For Two and Lizzie Kelly parted company at the second fence that day but gained handsome consolation at Aintree in April. He was well beaten on his seasonal debut at Aintree last month and the King George is his probable target. Shantou Flyer and Traffic Fluide complete the entries and both look out of the depth here.

The Betfair Chase is due off at 3.00 on Saturday 25th November and will be televised live on ITV.