The feature race at Haydock Park on Saturday is the £200,000 Grade 1 Betfair Chase over three miles at 3.00. The race is also the first leg of the £1million Triple Crown bonus for any horse that goes on to win the King George VI Chase and the Cheltenham Gold Cup

The race was first run in 2005 and was dominated by Paul Nicholls with six winners in the first ten years. Kauto Star was responsible for four of those victories between 2006 and 2011 with Silviniaco Conti successful in 2012 and 2014. Colin Tizzard’s Cue Card won the race three times (2013, 2015, 2016) but was well beaten in heavy ground last year by Bristol De Mai.

The scene is set for Cheltenham Gold Cup first and second, Native River and Might Bite, to clash once again this weekend. Native River came out on top at the Festival meeting, grinding out a four and a half lengths victory under Richard Johnson. That was only his second run of the season following an easy victory in a three-runner race at Newbury.

Native River won the Welsh National in 2016 and has the reputation of being a dour stayer, best suited by soft ground. He did finish third in the 2017 Gold Cup on good ground and has clearly improved from his early career as a novice. The going is currently good to soft at Haydock.

Those conditions and the shorter trip should suit Nicky Henderson’s Might Bite, a winner at Aintree on his final start last season. He stalked Native River throughout the Gold Cup and led at the second last before being outstayed in the closing stages. Henderson has been quite bullish in his pre-race comments and the vibes from Lambourn are that Might Bite will not be beaten through lack of fitness. The son of Scorpion won the King George in December and that is his main target for the early part of the campaign.

Connections of last years winner Bristol De Mai have been waiting for ease in the ground. The popular grey revels in the mud and turned the corresponding race into a procession 12 months’ ago, beating Cue Card by 57 lengths.

He was disappointing in his two subsequent races and underwent a wind operation in January. He returned to action at Aintree to finish a respectable second to Might Bite. Trainer Nigel Twiston-Davies does not believe that he needs bottomless ground to be at his best but any further rain would certainly help. 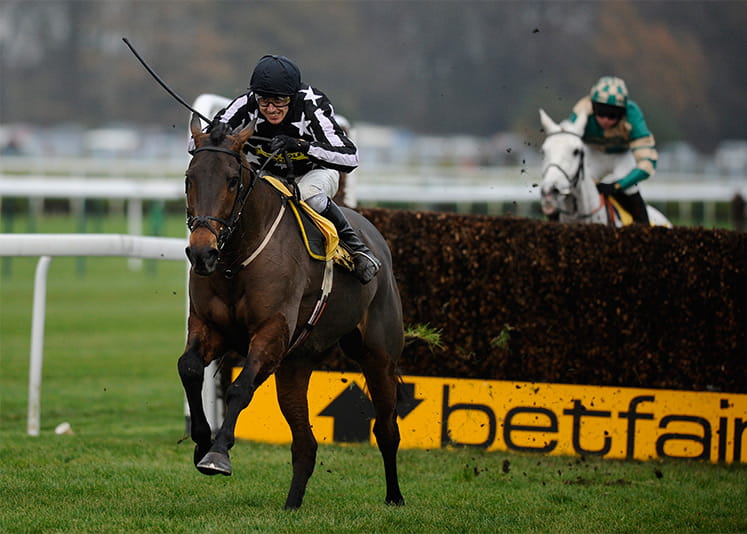 Paul Nicholls bids to add to his impressive record in this race with the progressive Clan Des Obeaux. He finished third at Aintree on his first run over three miles. He showed his best form when beating Vintage Clouds by seven lengths here in heavy ground last year. That was over an extended two and a half miles and he is yet to prove that he is as effective at this distance.

The race could also see the return of Thistlecrack, the winner of the King George in 2016 and a stable companion of Native River. His shock defeat by the ill-fated Many Clouds was followed by an absence of almost a year. He was far from disgraced when fourth in last season’s King George but this will be his first run since.

The Betfair Chase is due off at 3.00 at Haydock Park on Saturday 24th November and will be shown live on ITV.