The feature race at Ascot on Saturday is the £150,000 Grade 1 Betfair Ascot Chase over two miles and five furlongs.

The Lambourn Trainer saddles favourite Top Notch this year who is seeking a hat-trick after victories at Ascot and Taunton. The seven-year-old has been a model of consistency for connections, winning 12 of his 21 races under rules and being placed on a further seven occasions.

Top Notch was runner-up in the 2015 Triumph Hurdle and finished a creditable fifth in the Champion Hurdle the following season. Henderson put him over fences immediately after that race and he finished a game second in the JLT Novices’ Chase at last year’s Cheltenham festival meeting.

He was given a pipe-opener over hurdles in November before winning the Christy 1965 Chase over course and distance in November. That form looks even better now with runner-up Double Shuffle filling the same spot in the King George next time. Top Notch defeated Josses Hill in workmanlike fashion at Taunton in December and looks the one to beat.

Edward Harty saddles impressive Ascot Graduation Chase winner Coney Island in the colours of JP McManus. He overcame an absence of almost a year to slam Adrien Du Pont by nine lengths. Jockey Barry Geraghty was able to ease him down before crossing the line. Coney Island was a top class novice in 2016, winning a Grade 1 at Fairyhouse and finishing second to Our Duke at Leopardstown. Harty is currently favouring the Ryanair in preference to the Cheltenham Gold Cup as Coney Island’s festival target.

Waiting Patiently is an exciting prospect for Ruth Jefferson, a seven-year-old gelding by Flemensfirth. He takes a step up in class after winning all five starts over fences. He defeated Politologue at Haydock in January last year but was not seen again until November. He returned with a comfortable victory at Carlisle before beating Art Mauresque in a Listed race at Kempton in January. He is entered in the Champion Chase and the Ryanair at the Cheltenham Festival next month.

The popular twelve-year-old Cue Card will be attempting to win the race for a record third time this weekend. Colin Tizzard’s veteran is reportedly working as well as ever at home but age may finally be blunting his speed. He was beaten a very long way by Bristol De Main in the Betfair Chase in November and has not raced since. 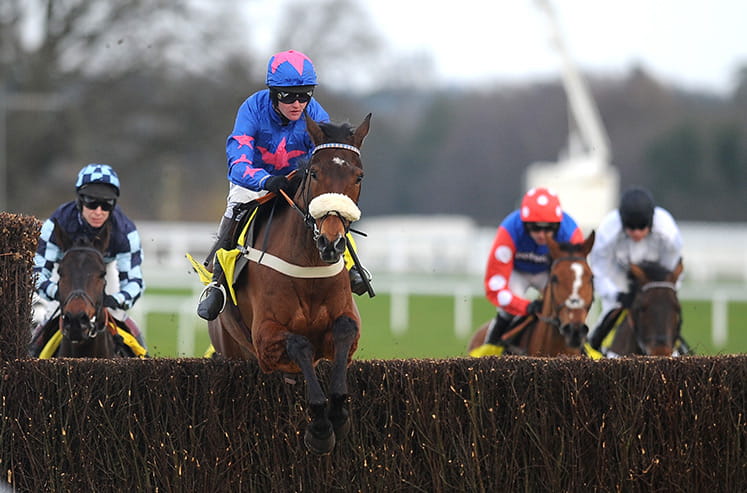 Frodon is another chaser taking a step up in grade for Paul Nicholls. The six-year-old has worked his way through the handicap, winning off a mark of 154 at Cheltenham in January. He had previously finished second over three miles at Ascot and this looks to be his ideal trip. Frodon finished over ten lengths behind Top Notch here in November and is only 1lb better off at the weights. Speredek finished a highly creditable second to Un De Sceaux in the Grade 1 Clarence House Chase last month. That was a career-best for Nigel Hawke’s gelding but he will need to improve again to feature on Saturday.

The Betfair Ascot Chase is due off at 3.35 on Saturday 17th February and will be televised live on ITV4.