Kempton stages a good quality card on Saturday with several Cheltenham hopefuls in action. The big betting race of the day is the £100,000 Racing UK Handicap Chase at 3.35.

The race was formerly run as the Racing Post Chase and has been won by some top class horses. Rhyme n’ Reason (1988) and Rough Quest (1996) both went on to win the Aintree Grand National after taking this valuable prize. Desert Orchid (1990), Docklands Express (1991 and 1992) and Gloria Victus (2000) were other notable winners.

Richard Johnson is the leading jockey in the history of the race with five victories, three of them for Philip Hobbs. The yard has won it four times in total, most recently with Quinz in 2011. Theatre Guide won the race in 2016 but had to settle for third place last year behind Pilgrims Bay.

Harry Fry has decided to run Acting Lass here in preference to the Pendil Novices’ Chase on Saturday. The seven-year-old gelding is unbeaten in three races over fences at Market Rasen, Leicester and Ascot. He started favourite on each occasion, most recently proving too strong for Kilcrea Vale in January. He has been raised 6lbs and would be stepping up to three miles for the first time.

Nicky Henderson has withdrawn market rival Gold Present who won at Newbury in December before taking the Ascot Silver Cup. The Lambourn trainer relies on Josses Hill, well beaten on his most recent start at Kempton in January.

Tintern Theatre has failed to complete in three of his last five races. He did beat Pilgrims Bay at Kempton in December but blundered away his chance at Haydock next time. Sam Twiston-Davies kept him wide of his rivals on his last visit here, presumably to give him a better view of his fences. He remains a risky proposition but is well handicapped on his best form. He is as short as 6-1 with some firms but still available at 9-1 with Ladbrokes. Stable companion Ballykan was beaten nine lengths here in January and this looks a much tougher contest.

Fergal O’Brien saddles Master Dee, a nine-year-old gelding by King’s Theatre. He has won three of his eleven races over fences and has been placed in the other eight. He is sure to run his usual game races but has not been seen since chasing home On Tour at Aintree in November.

Jonjo O’Neill’s Go Conquer won gamely at Ascot in November but his jumping let him down at the same course next time. He was already back-pedalling when unseating his rider at the third last. He had been put up 9lbs for his previous victory and the handicapper may have taken his measure. 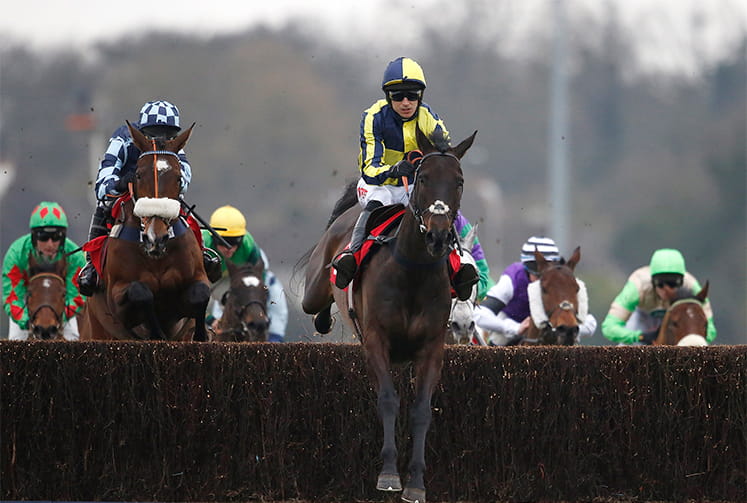 Paul Nicholls is doubly represented with Art Mauresque and As De Mee. The former is the shortest in the betting following a decent run at Kempton in January when second to Waiting Patiently. He had no chance with the impressive winner but the form was given a massive boost when that horse followed up in last week’s Grade 1 Ascot Chase. As De Mee unseated his rider in the Becher Chase at Aintree in December and these smaller fences should be more to his liking.

The Betdaq Handicap Chase is due off at 3.35pm on Saturday 24th February and will be televised live on ITV4.