The big betting race on the card at Ascot on Saturday is the £75,000 Bet365 Handicap Chase over 2 miles and 5 furlongs.

The weights are headed by the Mick Channon-trained Mister Whitaker, a seven-year-old gelding by Court Cave. He has won four of his seven races over fences, including a valuable Novices’ Handicap Chase at last year’s Cheltenham Festival. He reappeared with a decisive victory at Carlisle in November before finishing fourth to Baron Alco in the BetVictor Gold Cup at Cheltenham. He could never land a blow that day but remains an exciting prospect.

The ante-post favourite is Gary Moore’s Benatar, third to Valtor over three miles here in December. That was his first attempt beyond this distance and he did not appear to see it out. The drop back in trip is in his favour and he won here as a novice. Time may show that he was facing a very well handicapped horse in Valtor who has since been given an entry in the Cheltenham Gold Cup.

There has also been market support for Jerrysback, trained by Philip Hobbs and ridden by Barry Geraghty. He was having only his third race over fences when beaten here by Vinndication in December. That was a big step up from a novices’ chase at Bangor-on-Dee and he now takes on seasoned handicappers.

Robert Walford’s Mr Medic has a good record here with two previous victories. The most recent of those came over course and distance in November when beating Flying Angel by three lengths. The handicapper put him up 9lbs for that success and he struggled in the Caspian Caviar Gold Cup at Cheltenham. Mr Medic made a mistake at the fourth last and faded in the closing stages to finish sixth behind Frodon. He is racing off the same mark here but will be suited by the return to Ascot.

Happy Diva was beaten by Mister Whitaker at Carlisle and meets that rival on similar terms. Kerry Lee’s mare was still travelling well when brought down at Cheltenham next time. She returned to Prestbury Park to chase home Aso on good to soft ground. Aso is trained by Venetia Williams who may rely on Belami Des Pictons. The eight-year-old has not raced since finishing second to Waiting Patiently at Carlisle in November 2017. He looked an exciting prospect as a novice but the lengthy absence is a big concern.

Williams also has Calipto entered, a four lengths winner at Wincanton earlier this month. The nine-year-old has always been talented but his jumping will be tested by these stiff fences. He parted company with his jockey in the race won by Doitforthevillage at Chepstow’s Welsh National meeting. Paul Henderson’s gelding is up 7lbs, a career-high for the ten-year-old.

Glen Rocco stepped up to three miles in impressive fashion when winning by a wide margin at Kempton last weekend. That followed an eye-catching run behind Glen Forsa over this trip at the same track. The handicapper has given the gelding a massive 13lbs hike for last week’s success and his future looks certain to be over longer distances. Cyrname was over four lengths behind Mister Whitaker at Carlisle and has since been well beaten here in November.

Stable companion San Benedeto finished well ahead of him in fourth that day. The Layman gelding competed against the best over two miles, notably when second to Altior in the Bet365 Celebration Chase last year. He finished a remote sixth to Charbel at Huntingdon in December but his ability to stay this trip must be taken on trust. 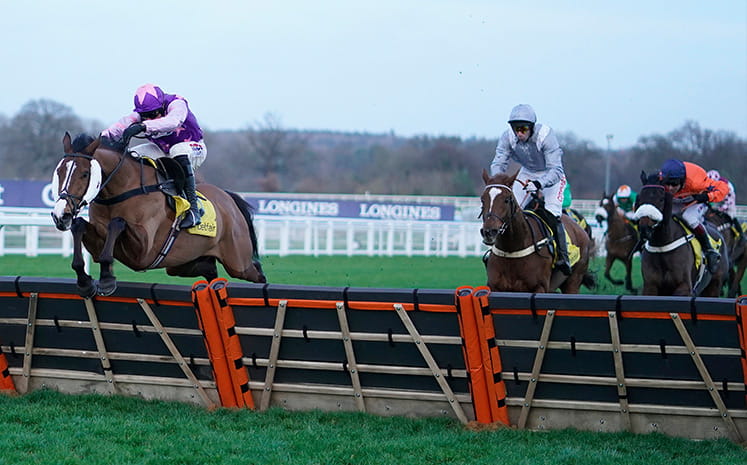 The Bet365 Handicap Chase is due off at 3.00 on Saturday 19th January at Ascot and will be televised live on ITV4.