The big betting race at Sandown on Saturday is the £150,000 Bet365 Gold Cup over three and a half miles. The race was formerly known as the Whitbread Gold Cup and has produced some of the most memorable races in jumping history.

Desert Orchid was a brilliant winner in 1988 while Mr Frisk followed up his record breaking Grand National when winning here in 1990. The most exciting finish to the race came in 1984 when the Queen Mother’s Special Cargo dashed home to beat Lettoch and two time winner Diamond Edge.

Talkischeap the market mover at Sandown

There has been an ante-post gamble on Alan King’s Talkischeap, a seven-year-old son of Getaway. He won a novices’ chase at Doncaster in January before chasing home On The Blind Side at Kempton. On his most recent start he finished fifth of nine behind Walt in the 888Sport Handicap Chase.

Step Back bolted up in this race 12 months’ ago for Mark Bradstock. He was racing off a mark of 135 when beating Rock The Kasbah by 13 lengths. The handicapper raised him by a stone in the weights as a result and he has not featured in his three subsequent races. He was prominent in the Grand National on the first circuit but gradually faded and was eventually pulled up.

The Young Master is another previous winner of the race having beaten Just A Par by a short-head in 2016. He was rated 148 that day and will race off a 6lbs lower mark on Saturday. He won at Cheltenham in November and finished a good third to Any Second Now in the Kim Muir Challenge Cup last time.

Give Me A Copper was well backed at Cheltenham last time but fell at the last. He was well beaten at the time and could renew rivalry with the winner, Beware The Bear. The latter would have to carry top weight here and there may be issues with the ground. Trainer Nicky Henderson withdrew him on the morning of the Scottish Grand National because he considered the ground too quick. He needs rain if he is to take his chance this weekend.

Joe Farrell bids to bounce back from Aintree disappointment

Rebecca Curtis was optimistic of a bold run from Joe Farrell in the Grand National earlier this month but the gelding was pulled up two from home. Last year’s Scottish National winner had run a promising race previously behind Chic Name at Newbury. Joe Farrell held an entry in the Irish Grand National but was withdrawn as that race probably came too soon after his Liverpool exertions.

It is a similar story for Rock The Kasbah who was unable to provide Richard Johnson with his first Grand National winner. He was brought down at the eighteenth but was never really travelling. He was sixth in this race in 2017 and runner-up to Step Back a year ago.

Bryony Frost hit the headlines when winning on Frodon in the Ryanair Chase at the Cheltenham Festival. She was brought back down to earth with a bang and a broken collarbone but is set to partner Present Man here. He was last seen finishing a remote fourth to Royal Vacation at Taunton in January. Rolling Dylan was a close third to Cogry at Cheltenham in December and would have a chance on that evidence. He was well beaten here next time and finished runner-up to Samuel Jackson at Taunton last month.

Harry Fry’s Just A Sting was well beaten at Cheltenham last time after finishing second to Adrien Du Pont at Kempton. West Approach has been performing well over hurdles and now makes the switch back over fences for Colin Tizzard. He was runner-up to Stayers Hurdle winner Paisley Park at Ascot and Cheltenham and would be interesting if he could convert that form to fences. Vyta Du Roc was beaten a short-head by Henllan Hari in this race in 2017. The grey has been largely disappointing since, although he did win at Cheltenham in heavy ground last year. He is tried in a visor for the first time. 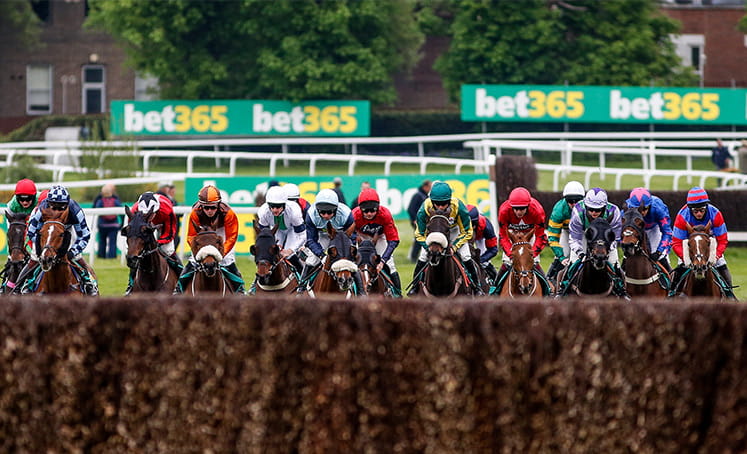 The Bet365 Gold Cup is due off at 3.35 at Sandown Park on Saturday 27th April and will be televised live on ITV.