Paul Nicholls and Nicky Henderson have dominated the race with nine winners between them. This race had been billed as a clash between their respective star chasers, Cyrname and Altior. The drying ground has forced Nicholls to withdraw Cyrname, although he has left him in the Grade 2 Oaksey Chase at 2.25 over two and three-quarter miles. Cyrname’s most recent victory earned him an official rating 3lbs superior to Altior. There is no doubt that he has the potential to put Altior to the test but the big showdown must now wait until next season.

Altior side-stepped the Aintree meeting in order to wait for this race as he bids to complete a hat-trick. He briefly looked in trouble at Cheltenham in the Champion Chase last time but rallied in his usual style to beat Politologue and Sceau Royal. He is trying for a record nineteenth successive victory and has now won at the last four Cheltenham festival meetings.

Altior was made to work hard by Un De Sceaux at Sandown in December in the Tingle Creek Chase, eventually winning by four lengths. He was not extended against inferior opposition at Kempton and Ascot so should be fresh and well for this weekend.

There is a suggestion that his relaxed running style will give him every chance of staying three miles and a possible tilt at the King George VI Chase at Kempton next season. It remains to be seen whether that will materialise with a third consecutive Champion Chase likely to be his main objective.

Sceau Royal ran a super race at Cheltenham, tracking Altior and being driven up the inside to challenge at the last. He did not quite sustain his effort up the Cheltenham hill but he won’t be far away if able to reproduce that effort. That was his first race over fences since finished a remote last of four to Altior here in December.

It is very difficult to see anything else to trouble the favourite here. God’s Own is getting a bit long in the tooth at the age of eleven and may have lost a bit of speed. Nicholls relies on Diego Du Charmil, a remote last of three behind Altior at Ascot in January.

Vosne Romanee is trained by Dr Richard Newland and finished second in a handicap at the Scottish Grand National meeting off a mark of 151. That leaves him 24lbs below Altior in the official ratings. The field is completed by Gary Moore’s 121-rated handicapper Darebin who is surely racing only in the hope of picking up some place money. 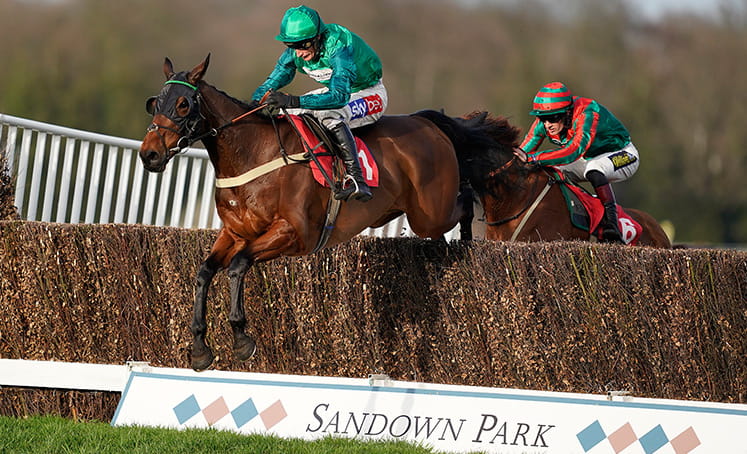 The Bet365 Celebration Chase is due off at 3.00 at Sandown Park on Saturday 27th April and will be televised live on ITV.