Justify will try to become the thirteenth winner of the American Triple Crown when he lines up in Saturday’s Belmont Stakes.

It was 37 years on from Affirmed’s heroic 1978 Triple Crown before American Pharaoh ended the drought. He was trained by Bob Baffert who is now one step away from a second Triple Crown within four seasons. What is all the more remarkable is that Justify did not set foot on a racecourse as a two-year-old. No previous Triple Crown winner was unraced as a juvenile but records are there to be broken. Justify is around even money favourite to put his name alongside the likes of War Admiral (1937), Secretariat (1973) and Seattle Slew (1977).

Inside draw for Justify in Belmont

Justify has been handed the number one barrier. This ought not to be a decisive factor over a mile and a half but, as we saw with Saxon Warrior in the Epsom Derby, it is far from ideal. Ryan Moore was hemmed in on the rail turning for home while his rivals had clear daylight. There were other factors behind Saxon Warrior’s defeat but Mike Smith will be wary of suffering a similar fate.

Justify remains unbeaten with five wins and was particularly impressive in the Kentucky Derby. Smith sent him to the front with half a mile to travel and he stayed on strongly to beat Good Magic and Audible. Bravazo (sixth), Hofburg (seventh), Vino Rosso (ninth), Free Drop Billy (sixteenth) and Noble Indy (seventeenth) all renew rivalry in the Belmont.

Justify then followed up in the Preakness Stakes, this time taking it up at the quarter-mile pole and holding Bravazo and Tenfold. The runner-up was almost eight lengths closer than he had been at Churchill Downs and looks a serious threat on Saturday. Tenfold was having only his fourth race for Steven Asmussen and must also have delighted his connections. Inexperience probably cost him in the Arkansas Derby but he looked much more street-wise at Pimlico.

Hofburg suited by step up in distance

Although beaten nine lengths in the Kentucky Derby, Hofburg caught the eye with a strong run in the home straight. The son of Tapit was way off the pace that day but was rapidly overhauling rivals all the way to the finishing line. William Mott trains the chestnut for Juddmonte Farms, colours made famous by the likes of Dancing Brave and Frankel. Hofburg certainly is not in that league but his staying power will surely come into play here.

Gronkowsi was formerly trained by Jeremy Noseda in the UK and was being aimed at the Kentucky Derby. A trial success on the all-weather at Newcastle did not set the world alight but he missed the big race due to a minor set-back. The owners took the decision to move the Lonhro colt to Chad Brown in the States and he will have his first run for the yard in the Belmont. 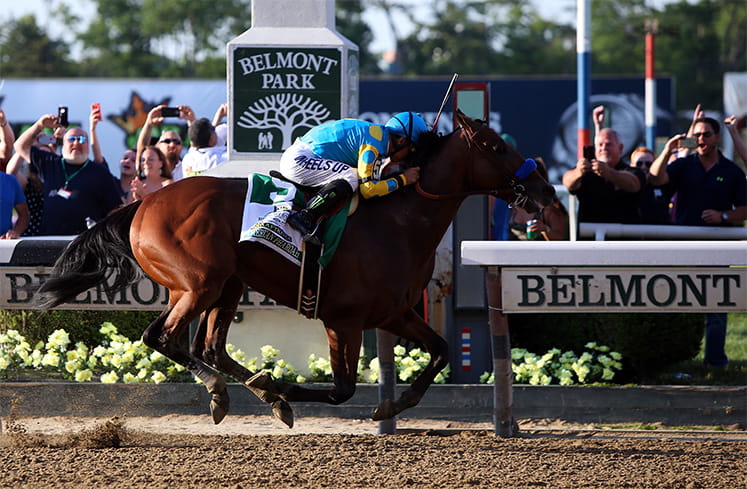 The Belmont Stakes is due off at 11.46pm (UK time) and will be screened live on Attheraces with coverage from the meeting starting at 9pm.