The big International race of the weekend is the 149th running of the Belmont Stakes, the final leg of the American Triple Crown.

American Pharoah ended the long wait for a Triple Crown winner in 2015, the first to do so since Affirmed in 1978. Affirmed’s great battles with Alydar guaranteed him a place in the Hall Of Fame alongside Secretariat (1973) and Seattle Slew (1977). There will be no Triple Crown winner this season with the winner of the Kentucky Derby and the Preakness both absent. The race received a further blow in midweek when favourite Classic Empire was withdrawn just hours before the draw. The colt, runner-up in the Preakness, is suffering from a hoof abscess and will now be aimed at the Breeders’ Cup.

Bookmakers are divided on the new favourite with Epicharis and Irish War Cry favoured narrowly above Lookin At Lee. Epicharis represents Japan and won the valuable Hyacinth Stakes on dirt in Tokyo in February. Kiyoshi Hagiwara then took the colt to Dubai where he was beaten a short-head by Thunder Snow in the UAE Derby.

The winner forced Christophe Soumillon to perform a rodeo act in the Kentucky Derby but ran a sound race in the Irish 2000 Guineas next time. Epicharis is reported to have coped well with the long journey to Belmont via Anchorage and Chicago. He will be ridden by regular partner Christophe Lemaire and has drawn barrier eleven.

Graham Motion saddles Irish War Cry who will start from gate seven under Rajiv Maragh. He finished only tenth in the Kentucky Derby after being up with the pace from the start. He was a spent force with a furlong to go and was beaten a long way at the finish. He burst on to the scene when winning the Holy Bull Stakes as a juvenile, adding the Grade 2 Wood Memorial in the Spring.

Lookin At Lee is the only horse to contest all three Triple Crown races this season. Steve Asmussen’s colt was runner-up to Always Dreaming in the Kentucky Derby when starting at odds of 33-1. Asmussen trained Creator to win the Belmont last season. Lookin At Lee then finished fourth behind Cloud Computing after being held up at the rear of the field. He is not guaranteed to stay the mile and a half on pedigree.

Senior Investment is a colt by Discreetly Mine out of Plaid by Deputy Commander. He won a Grade 3 at Keeneland for Kenneth McPeek to earn a tilt at the Preakness. He stayed on strongly from well off the pace to be beaten five lengths into third. McPeek suffered Classic disappointment when Daddys Lil Darling bolted and unseated her rider before the Epsom Oaks last week. It would not be the biggest surprise to see him bounce back in style here. 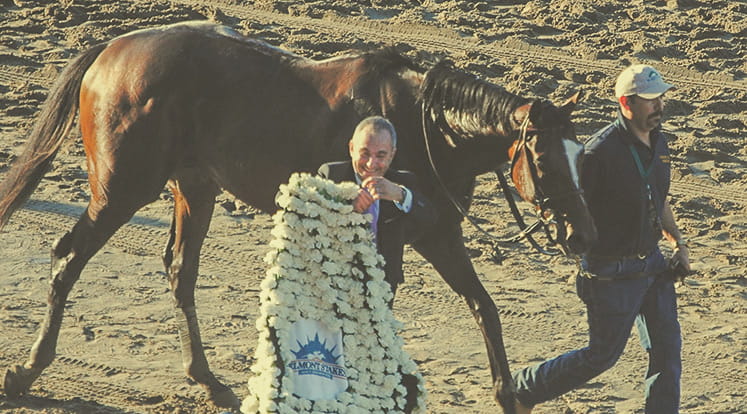 Tapwrit is trained by Todd Pletcher, successful in the Belmont with Rags To Riches (2007) and Palace Malice (2013). The Tapit colt raced too keenly in the Kentucky Derby and finished over ten lengths away in sixth. He looked useful when winning the Grade 2 Tampa Bay Derby in March and starts from barrier two on Saturday.

Dale Romans saddles another Churchill Downs disappointment in J Boys Echo, a colt by Mineshaft out of a mare by Menifee. He was beaten 23 lengths in the sloppy conditions but had good form in the Spring. He beat subsequent Preakness winner Cloud Computing by three and a half lengths at Aqueduct in March.

Gormley has a similar profile, winning the Santa Anita Derby before getting bogged down in the Kentucky Derby. John Shirreffs trains the son of Malibu Moon who is out of a Bernstein mare. Chad Brown relies on Twisted Tom in the absence of Cloud Computing. He is taking a step up in class but his pedigree suggests that he will be even better over a mile and a half. Illinois Derby winner Multiplier finished sixth in the Preakness. He never threatened the leaders that day and he is another with stamina doubts.

The Belmont Stakes will be televised live on AtTheRaces