The feature race at Aintree on Saturday is the Grade 3 Becher Chase over three and a quarter miles at 1.30.

The race was introduced in 1992 as an early Grand National trial with 21 fences to be jumped over the famous Liverpool course. Amberleigh House (2001) and Silver Birch (2004) were successful in both races while Earth Summit (1998) won the Becher Chase after his Grand National victory. Other winners familiar to Grand National fans are Clan Royal (2003), Hello Bud (2010) and Oscar Time (2014). Vieux Lion Rouge won the race last year for David Pipe, beating Highland Lodge and The Last Samuri.

The breath-taking recent win of Bristol De Mai in the Grade 1 Betfair Chase is a clear pointer to the chances of Blaklion. The eight-year-old was beaten only half a length by his stable companion at Wetherby. The pair finished 23 lengths ahead of third-placed Definitly Red with Vieux Lion Rouge a similar distance further back in fourth.

Blaklion was receiving only 6lbs from Bristol De Mai who is now likely to run in the King George VI Chase at Kempton. The case for Blaklion is enhanced by his excellent record at Aintree. He was fourth in a Grade 1 hurdle in 2015 and third in a Grade 1 novices’ chase on the Mildmay course last year. He then ran a mighty race in the Grand National to finish fourth to One For Arthur. Blaklion led going strongly at the 26th fence but could not quite sustain his effort. This race is a mile shorter and looks tailor-made for the gelding.

Last year’s winner Vieux Lion Rouge is set to reappear on Saturday, despite having so much ground to make up on Blaklion. He finished sixth in the Grand National after fading from the third last. He was receiving 6lbs from the favourite when beating Blaklion in the Grand National Trial at Haydock in February. That was off a 4lbs higher mark than when successful in the Becher Chase. Vieux Lion Rouge is now 10lbs higher than a year ago.

Highland Lodge was bought by the Thompson family just five days before last season’s Grand National. The eleven-year-old was beaten only a short-head by Vieux Lion Rouge in this race last year but was pulled up at Aintree. He won the Becher Chase in 2015 and has delighted trainer James Moffat with his recent work.

Lord Windermere won the Cheltenham Gold Cup for Jim Culloty back in 2014 but has failed to win in nine subsequent races. He finished seventh in the National but never threatened to get competitive. 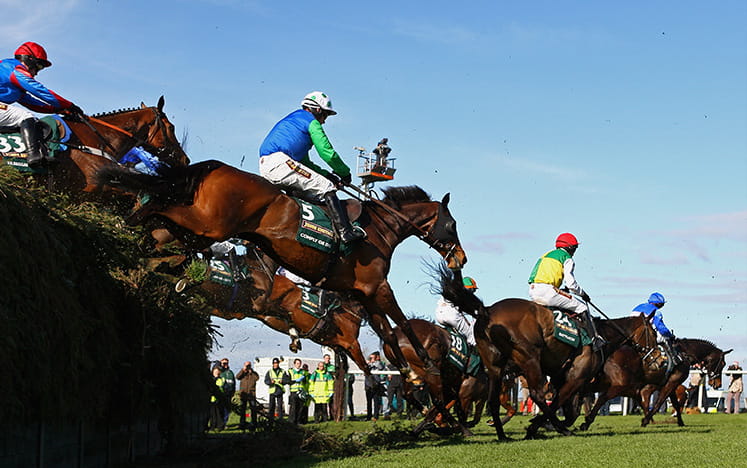 The Last Samuri ran disappointingly in the National and bids to bounce back to form for Kim Bailey. The nine-year-old was runner-up in the 2016 Grand National behind Rule The World. He struggled off a 12lbs higher mark in April and will probably need this first run of the new season.

As De Mee represents Paul Nicholls and won the Grand Sefton here last December. That was over two miles and five furlongs. The gelding was also a fair fifth in the Topham here at the National meeting and will be fit after a recent run at Sandown.

Irish raider Rogue Angel was pulled up in the National after racing prominently for a long way. He was well beaten in this race a year ago but is a past Irish National winner and has to be respected.

The Becher Chase is due off at 1.30 on Saturday 9th December and will be shown live on ITV4.