Aintree stages a top quality card on Saturday featuring the £150,000 Becher Handicap Chase over the Grand National fences at 1.30. The race is a recognised trial for the big race with Amberleigh House (2001) and Silver Birch (2004) both winning both events in the same season. 1998 Grand National winner Earth Summit won this race in the same year while other notable winners include Feels Like Gold (1999), Black Apalachi (2008), Hello Bud (2010 and 2012) and Blaklion (2017).

Nigel Twiston-Davies has trained the winner on six occasions and Blaklion is seeking to repeat last year’s victory for the stable. The nine-year-old was a game winner of the RSA Chase at Cheltenham in 2016 but has just fallen short of Gold Cup class. He finished fourth in the 2017 Grand National here after travelling powerfully into the lead at the 26th fence.

The National was his big target again last season and he underlined his claims when romping to a nine lengths win in this race. He was receiving 6lbs from The Last Samuri and beat that rival by nine lengths. Blaklion was anchored by his big weight in desperate ground at Haydock in February and was brought down at the first fence in the National. Twiston-Davies sought compensation in the Bet365 Gold Cup at Sandown but the horse was never travelling and was eventually pulled up.

Stable companion Ballyoptic is also prominent in the betting after his narrow defeat in the Scottish National at Ayr in April. He was beaten a nose by Joe Farrell, a fine effort on only his sixth start over fences. This will be his first sight of the big National fences and he has been raised 6lbs in the handicap.

Warren Greatrex saddles Cheltenham Kim Muir Chase winner Missed Approach. He was pulled up at Sandown on his final start but he had a very hard race at Cheltenham and was probably feeling the effects. Missed Approach has won after a lengthy lay-off in the past.

The weights are headed by Gordon Elliott’s Don Poli, off the racecourse for almost two years. He won the RSA Chase back in 2015 and was third in the Cheltenham Gold Cup the following season. It will be a masterful piece of training to have the gelding fit enough to do himself justice after such a long lay-off. Elliott is also represented by Noble Endeavour, a nine-year-old gelding by Flemensfirth. He has not raced for 600 days, his last appearance being in the Irish National of 2017 when sixth to Our Duke.

Present Man won the valuable Badger Ales Trophy at Wincanton for the second consecutive season last month. Paul Nicholls trains the eight-year-old with regular rider Bryony Frost set to tackle the Aintree fences this weekend. Vieux Lion Rouge has run in the last three Grand Nationals, completing the course on each occasion. His best effort was when sixth to One For Arthur in 2017. He beat Highland Lodge by a short-head in this race the previous year and that rival is 6lbs better off on Saturday. Both horses have had their problems since and their fitness must be taken on trust.

Colin Tizzard won last weekend’s big handicap with Sizing Tennessee, tipped in this column at 25-1. He relies on two-time Topham winner Ultragold. That race is over an extended two and a half miles

and that is probably his best distance. The pick of the outsiders could be Irish raider Crosshue Boy, a winner at the Scottish National meeting in April. He should be sharper for a recent spin over hurdles and has form on all types of ground. 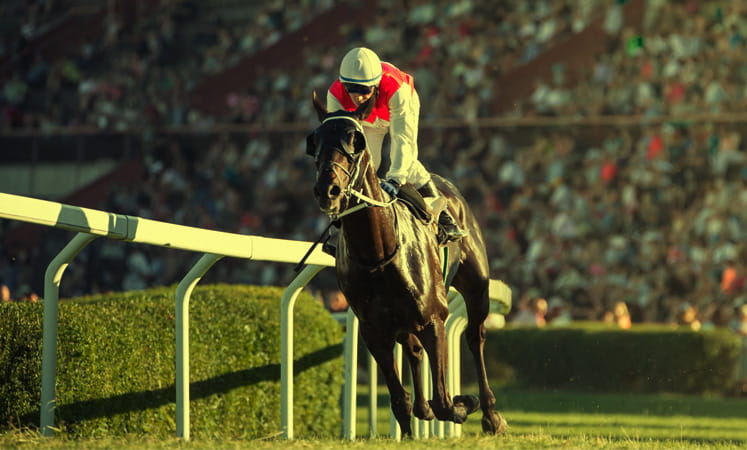 The Becher Chase is due off at 1.30 at Aintree on Saturday 8th December and will be televised live on ITV4.