The race attracted a massive 215 entries which have been reduced to a maximum field of 27. Such is the popularity of the race, that there is now a Silver Cup and Bronze Cup for horses which did not make the cut. The last Scottish-trained winner of the Ayr Gold Cup was Roman Warrior who defied top weight of ten stone in 1975. Trainer Kevin Ryan has won the race three times while David Nicholls has four Ayr Gold Cup victories on his CV. Richard Fahey won the race for the second time with Don’t Touch in 2015, the first winning favourite since Coastal Bluff in 1996.

Fahey saddles the favourite again this year in Growl, a four-year-old gelding by Oasis Dream out of a mare by Storm Cat. He joined Fahey from Brian Meehan in April and has since won handicaps at Nottingham and Windsor. He then tackled seven furlongs at Newmarket when finishing a creditable fourth in the Bunbury Cup. Ryan Moore rode Growl in the Stewards’ Cup at Goodwood where he flashed home in fourth place after being poorly drawn.

Orion’s Bow finished just ahead of Growl in second place at Goodwood but he was drawn up with the pace on the far side. The David Nicholls-trained gelding was favourite for the Great St Wilfrid at Ripon next time but could do no better than eighth place behind Nameitwhatyoulike. The winner followed up at York for Bryan Smart but is set to race off an 8lbs higher mark at Ayr. Smart has booked useful 5lbs claimer Adam McNamara to reduce the burden.

There has been a lot of ante-post support for Magnus Maximus who is chasing a hat-trick after wins at Chelmsford and Ascot. He was particularly impressive last time when making all the running to beat Royal Birth by a length and a half.

Kevin Ryan’s Brando finished out of the frame for the first time this season when finishing ninth to Mecca’s Angel in the Nunthorpe Stakes. He had previously been beaten three lengths by the same horse at the Curragh in July. Ryan could also run Flaming Spear who has not been seen since finishing last at York in May. He was sent off favourite that day but the lightly-raced four-year-old has clearly had his training problems.

Jim Goldie’s Jack Dexter won the Bronze Cup at Ayr in 2012 and has run in the Gold Cup for the past three seasons. He was third in 2013 off a rating of 110 but has gradually slid down to a mark of 101. G Force won the Group 1 Haydock Sprint Cup in 2014 when trained by David O’Meara. The five-year-old has lost his way since but hinted at a return to form when third at Navan recently. 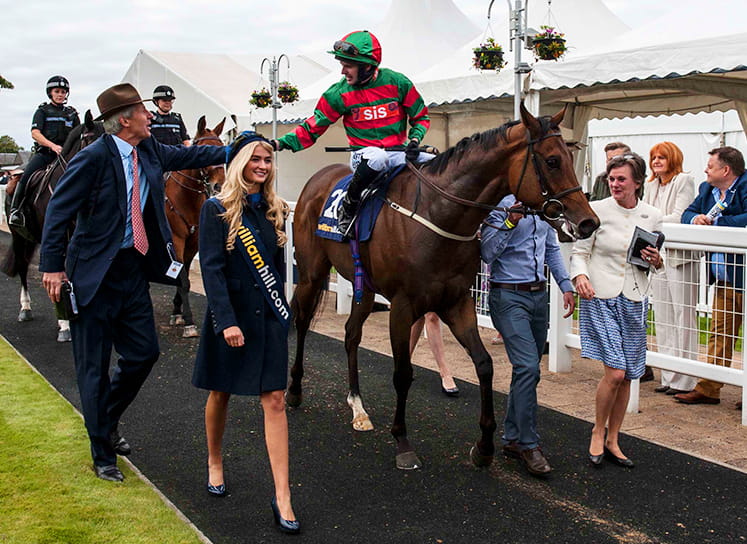 2011 Stewards’ Cup winner Hoof It is well into the veteran stage at the age of nine but appears to have found a new lease of life for Michael Easterby. He won at Haydock in July and won the Stewards’ Cup Consolation race later that month.

Hillbilly Boy is in the form of his life for Tom Dascombe, winning his last three races. All were around the tight turns of Chester but he ran well when third in the Silver Cup last year to finish third to Tatlisu. He is now 10lbs higher than last year with Richard Kingsgate taking over in the saddle from Hayley Turner.

John Gosden saddles Johnny Barnes, a four-year-old colt by Acclamation out of a mare by Danehill. He won a Group 3 over a mile in France in August last year but has failed to trouble the judge since. His best effort was a close fourth to Home Of The Brave at Leicester in April but he has never raced over six furlongs.

Poyle Vinnie was beaten only half a length by Don’t Touch last year and this will have been his target ever since. His latest run at Chester offered plenty of hope that a bold run is imminent when he was beaten just over a length into third by Judicial and he looks good each-way value at 33-1.

GrowlNameitwhatyoulike and the evergreen Hoof It both likely to be up with the pace. G Force looks worth supporting at long odds while the best value of those drawn high could be last year’s runner-up Poyle Vinnie who starts from stall 23.