The richest race on the card at Sandown on Saturday is the £65,000 Group 3 Atalanta Stakes over a mile. The race is restricted to fillies and mares aged three years and upwards.

Sir Michael Stoute has a good record in the race with six winners, including Dank in 2012. She went on to win the Grade 1 Beverly D Stakes and the Breeders’ Cup Filly & Mare Turf. The following season, Stoute’s Integral dead-heated with Richard Fahey’s Lady’s First in a thrilling finish. Other high class winners of the Atalanta Stakes include One So Wonderful (1997), Musicanna (2005) and Fintry (2014). Last year’s race was won by John Gosden’s Persuasive who defeated Blond Me and Lucy The Painter.

Sir Michael Stoute’s representative this year is Intimation, a five-year-old daughter of Dubawi out of a Pivotal mare. She was placed in a Group 3 last season before winning a Listed race at Naas in heavy ground in October.

Intimation returned to action at Goodwood in May where she chased home Laugh Aloud. Her next outing was not until last weekend’s Group 3 Snow Fairy Stakes at the Curragh. She met trouble in running before finishing strongly behind Rain Goddess. She will be difficult to beat if she turns out again quickly.

John Gosden bids to win the race for the second successive season with Nathra. The Iffraaj filly did not quite live up to expectations last season, despite finishing second in the French Guineas. She looked in need of the run when sixth to On Her Toes at Ascot in July before finishing third to Massaat at Newbury. She took a long time to hit top gear over seven furlongs and now goes back up to a mile.

Aljazzi the market leader at Sandown

Aljazzi has solid claims if able to reproduce her excellent run at Royal Ascot. Marco Botti’s four-year-old started at 40-1 but was beaten only three-quarters of a length by Qemah. That was in the Group 2 Duke Of Cambridge Stakes on fast ground. William Haggas saddles On Her Toes, the winner of a Listed race at Ascot in July. She holds Nathra on that evidence and has been placed in Group 3 company in the past. Joe Fanning rode her prominently from a wide draw that day and she is likely to be up with the pace again on Saturday.

Lincoln Rocks won a very competitive York handicap last week under 9st 10lbs. David O’Meara’s four-year-old had previously been beaten by the impressive Sea Of Grace at Haydock. The Rock Of Gibraltar filly does not know how to run a bad race and has not been out of the first two in her last five outings.

Tisbutadream is a three-year-old filly by Dream Ahead trained by David Elsworth. She has won five of her thirteen races, most recently beating Queen Of Time in a listed race over course and distance in July. Tisbutadream was only three-quarters of a length behind On Her Toes at Ascot before losing out by a short-neck in a Group 3 at Deauville. 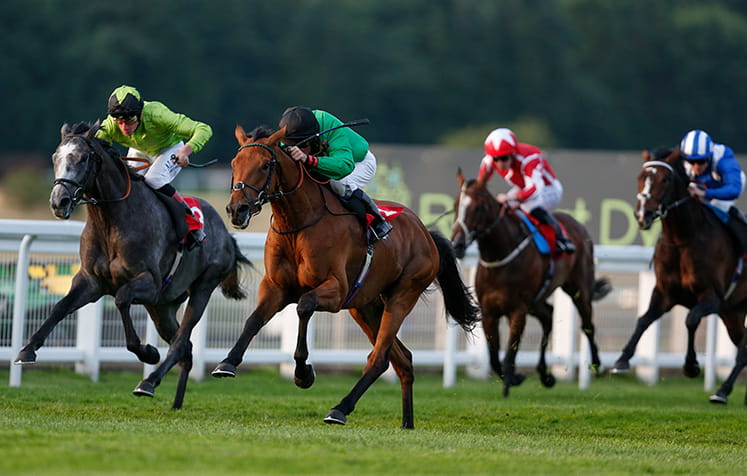 The Atalanta Stakes at Sandown is due off at 3.00 on Saturday 2nd September and will be televised live on ITV4.