Is Villa to be involved in the relegation battle?

The Villains lost 2-3 to Liverpool on Saturday and that was their fifth defeat this season. Aston Villa players don’t perform well at home, having chalked up from three matches at Villa Park just one draw and two defeats. In addition, Aston Villa haven’t won since the first round of the competition when The Villains won 1-0 against Bournemouth. If they keep performing at the same level they will be in serious trouble and will be involved in a relegation battle.

Stoke City’s first win in their campaign was in the last round against Bournemouth at home. The Potters late first victory has come of the team’s change in playing style, now the players finally feel comfortable with the new way of playing. Mame Biram Diouf is the man in form for Stoke City, scoring on three occasions from the beginning of the season.

The last three games between these two teams have ended with away victories (2 for Stoke City and 1 for The Villains). In fact, the last home win for Aston Villa against Stoke was 6 years ago, when the Birmingham side won 1-0 with a Carew goal in the second half.

The only one to miss the match for Stoke City is central defender Ryan Shawcross. He is suffering from a back injury and is still not fit enough to play.

Aston Villa attacker Gabriel Agbonlahor received a calf injury and misses the game against Stoke. He is expected to be fit for the visit to Stamford Bridge against Chelsea on 17 October 2015.

Jose Crespo (knee injury), Okore (knee injury) and Gardner (ankle injury) are long-term injuries and there is no exact date when they will be back on the pitch.

Peter Crouch is expected to be given a chance . It’s likely he will start from the bench. 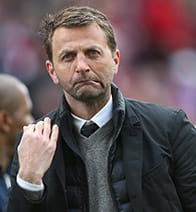 Mark Hughes (Stoke City) : “If you suggest I only select Marco van Ginkel because I have to, that’s completely wrong.”