The 3.10 at Ascot on Saturday is the £1.1 million Group 1 Queen Elizabeth II Stakes over a mile.

The Queen Elizabeth II Stakes is one of the most prestigious mile races of the flat racing season and has been won by some of the great milers of all-time. Brigadier Gerard won the race in 1971 and 1972 while Rose Bowl also won in consecutive seasons in 1975 and 1976. Other notable winners include Kris (1979), Teleprompter (1984), Dubai Millennium (1999), George Washington (2006) and Frankel (2011). Freddy Head has won the race for the past two seasons with Charm Spirit and Solow.

The ante-post favourite was Richard Fahey’s Ribchester, a three-year-old colt by Iffraaj out of a mare by Marju. He finished third in the 2000 Guineas in April before winning the Group 3 Jersey Stakes at Royal Ascot over seven furlongs.

He then showed that he could compete with the best milers in Europe when being beaten only half a length by The Gurkha and Galileo Gold at Goodwood. Fahey was optimistic of reversing the form in France next time and so it proved. He quickened up impressively to beat Vadamos by half a length with Galileo Gold well beaten.

Galileo Gold won the 2000 Guineas in good style, although that form has been let down badly throughout the season. He was beaten by Awtaad in the Irish 2000 Guineas and finished second to The Gurkha in the Sussex Stakes. There is little between him and Ribchester if you ignore his disappointing run at Deauville in August.

Awtaad team hoping for cut in the ground

Irish 2000 Guineas winner Awtaad blotted his copybook when finishing only eighth at Goodwood. Trainer Kevin Prendergast had hoped that the son of Cape Cross would handle the faster ground but he is clearly more effective on a softer surface. He bounced back with a fluent victory in a Group 2 at Leopardstown last month.

Aidan O’Brien had several options here and relies on 1000 Guineas winner Minding and Breeders’ Cup winner Hit It A Bomb. Minding went on to win the Epsom Oaks winner and finished third behind Almanzor and Found in the Irish Champion Stakes. She misses a return clash with that duo in favour of a drop back to a mile. She has displaced Ribchester at the head of the market with Ryan Moore taking the ride.

Hit It A Bomb was two lengths behind Awtaad at Leopardstown last time out. The son of War Front won at the Breeders’ Cup in October last year but is yet to recapture that form. Jet Setting upset the odds-on Minding at the Curragh in the Irish 1000 Guineas. The runner-up had banged her head in the starting stalls that day but Jet Setting is a decent filly in her own right. She ran out an easy six and a half lengths at Tipperary in a Group 3 earlier this month. 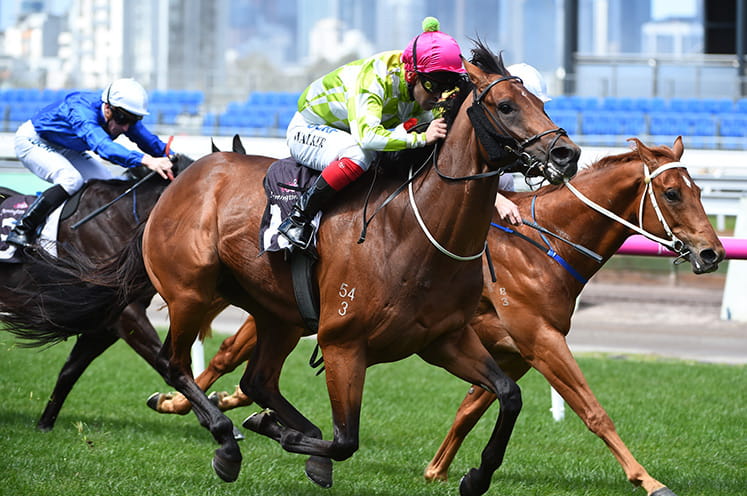 Murphy aboard Lightning Spear at Ascot

Oisin Murphy rides Lightning Spear for David Simcock, a five-year-old son of Pivotal out of a mare by Royal Academy. He has won five of his twelve races, most recently taking the Group 2 Celebration Mile at Goodwood. He looks held on his previous run when beaten three and a half lengths by Ribchester at Deauville.

Hathal is taking a big step up in class after battling to a narrow victory at Haydock in soft ground. That was his first run in almost a year for William Haggas and the four-year-old son of Speightstown clearly has plenty of ability. Jamie Spencer rides Mitchum Swagger who was only a head behind Hathal at Haydock. He was beaten in the Hunt Cup at Royal Ascot off a mark of 108 so this is also a big step up in class for David Lanigan’s gelding.

Stormy Atlantic won the Craven Stakes in the Spring but was bitterly disappointing in the 2000 Guineas. He was second in a Group 1 at Chantilly in July but was only seventh at Deauville last time.

The Queen Elizabeth II Stakes is due off at 3.10 on Saturday 15th October and will be televised live on Channel 4.