Last year the race was won by Waiting Patiently, denying Cue Card a record third victory in the race with Frodon back in third place. Ruth Jefferson’s gelding was forced to miss Cheltenham and Aintree through injury and made a belated return to action in the King George VI Chase at Kempton on Boxing Day.

He was held up in the early stages by Brian Hughes but was badly hampered by the falling Bristol De Mai and unseated his rider at the ninth. It was far too early in the contest to say whether he may have featured in the closing stages. That was his first run at three miles but he reverts to his favoured distance here.

Paul Nicholls saddles Politologue who finished fourth that day behind stable companion Clan Des Obeaux. He was also tacking the distance for the first time and should be much better suited by the drop back in trip. He won the Christy Chase over course and distance in November when beating Charbel by half a length. The grey beat Min by a neck in a thrilling duel at Aintree in April over two and a half miles and will be partnered by Sam Twiston-Davies on Saturday.

Cyrname up in class after handicap success

Nicholls is also represented by Cyrname, a wide margin winner of a valuable handicap here last month. He took up the running at the second fence and put in a terrific round of jumping, eventually beating Doitforthevillage by 21 lengths. The handicapper has put up his official rating from 150 to 165 as a result, just 3lbs below Politologue.

Fox Norton returned after a 389-day absence to chase home Altior in a 3-runner race at Ascot in January. The winner was hardly out of a canter that day so the form is difficult to assess but he was a high class performer in 2017. Fox Norton was only half a length behind Politologue at Sandown in the Tingle Creek Chase that year, staying on strongly at the finish. He is already a Grade 1 winner over two and a half miles so the trip holds no fears for him.

Charbel was in great form before Christmas, beating God’s Own by 8 lengths at Huntingdon. He was slightly disappointing next time when only third to Top Notch at Kempton Park. Aso is trained by Venetia Williams and has won his last two races in handicaps at Newbury and Cheltenham. He comfortably defied an 8lbs rise in the weights to beat Happy Diva last time and is now officially rated 163. 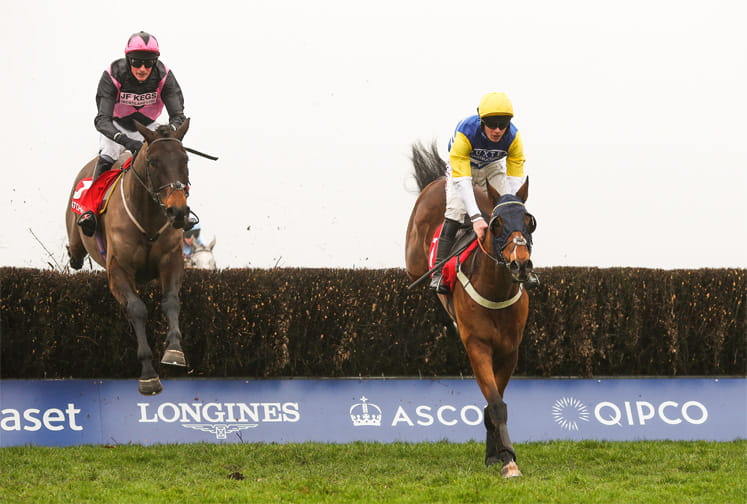 The Ascot Chase is due off at 3.55 on Saturday 16th February and will be televised live on ITV4.