The Aintree Grand National gets under way on Thursday 6th April, the first of three days of top-quality National Hunt racing. Keep scrolling down below for the full story ahead of the eagerly-anticipated festival, or head over to our complete runner-by-runner guide for a full run down of all of this year’s competitors.

Nicky Henderson enjoyed a successful Cheltenham Festival and is taking a strong team to Aintree. Top Notch has been a model of consistency this season and put up a brave fight when second to Yorkhill in the JLT Novices’ Chase. He can gain handsome compensation in the opening Manifesto Novices’ Chase at 1.45. His biggest threat could come from another Cheltenham runner-up in Cloudy Dream. Malcolm Jefferson’s grey was a good second to Altior in the Arkle and should be suited by the step up in trip.

It is difficult to oppose Champion Hurdler, Buveur D’Air, in the £200,000 Betway Aintree Hurdle at 3.25. He beat his stable companion, My Tent Or Yours, by four-and-a-half lengths at Cheltenham and can extend the advantage over an extra half-mile. Cue Card bids to make amends for his second successive fall in the Cheltenham Gold Cup when he lines up in the Betway Bowl at 2.50.

He never really looked to be travelling that day and could be given a run for his money by Empire Of Dirt. Gordon Elliott’s gelding bypassed the Gold Cup to run in the Ryanair, which was short of his best trip. In the circumstances, he did well to finish fourth.

Henderson can round off an excellent day with Theinval in the Red Rum Handicap Chase at 4.40. The seven-year-old won at Aintree over hurdles and the drying ground will be to his favour. It should also be a successful day for owner, JP McManus. Triumph Hurdle winner, Defi Du Seuil, should win the Juvenile Hurdle at 2.20 while On The Fringe was given far too much to do at Cheltenham. He can take the Foxhunters where he clashes with old rival, Pacha Du Polder.

Day 2 opens with a very tricky handicap hurdle at 1.40 with a maximum field. Henderson has several entries here including Fixe Le Kap and Thomas Campbell. The former was second in the Imperial Cup on his first run for almost a year and must have each-way claims. Thomas Campbell finished a respectable fifth in the Martin Pipe Hurdle at Cheltenham and also has every chance of making the frame.

River Wylde ran a great race to finish third in the Supreme Novices’ Hurdle. He is the clear, form choice for the 2.20, although Moon Racer has to be feared. He was out of his depth in the Champion Hurdle but he is far better than he showed that day. 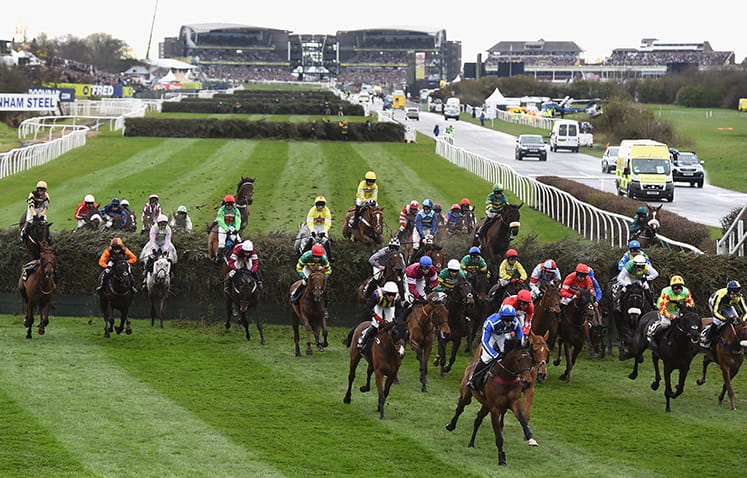 Henderson’s Might Bite and Whisper fought out the finish of the RSA Chase at Cheltenham. Might Bite surrendered his lead by wandering in the closing stages but battled back to win by a nose. This flatter track and faster ground should favour him and he is taken to confirm the form.

The featured JT Melling Chase at 3.25 looks wide open, although Fox Norton will be popular after his gallant second in the Ryanair. The two-and-a-half-mile trip is his biggest question mark and God’s Own is preferred. He won this race a year ago and was second in his other two visits to Aintree. The big betting race on the card is the Topham Handicap Chase over the Grand National fences at 4.05. As De Mee won the Grand Sefton over course and distance in December and should go well for Paul Nicholls and Sean Bowen.

Saturday’s card is all about the Grand National at 5.15, which we have previewed in depth elsewhere. The drying ground is a slight concern for supporters of One For Arthur, who carries the hopes of Scotland. He has enjoyed perfect preparation for the National and regular jockey Derek Fox has recovered from injury in time for the ride. Gordon Elliott’s Uccello Conti and David Pipe’s Vieux Lion Rouge ran well last year while runner-up, The Last Samuri, could go close despite carrying top weight.

The supporting card includes the £150,000 Liverpool Hurdle at 4.20 in which Unowhatimeanharry bids to recoup Cheltenham losses. Yanworth and Apple’s Jade could step up in trip here but the favourite’s proven stamina can see him home.

Charbel seeks consolation for his Cheltenham fall in the Maghull Novices’ Chase at 3.00. He was still in front when falling at the last in the Arkle and this looks an ideal opportunity to make amends. Messire Des Obeaux did not quite get up the hill at Cheltenham and this flatter track should suit him in the Novices’ Hurdle at 2.25.

ITV4 will be providing extensive coverage of all three days of the Aintree Festival with five races shown live. Coverage begins at 2.00pm on Thursday while the earlier races can be viewed on RacingUK.