Nick Gifford saddles the clear favourite here in Glen Rocco, a wide margin winner over course and distance last month. The eight-year-old gelding had caught the eye on his previous start when staying on strongly behind Glen Forsa over two and a half miles. He powered clear under James Davies to beat Bally Longford by 23 lengths off a mark of 124. The handicapper has predictably put him 13lbs for that success but he still gets in here with just 10st 7lbs to carry.

The in-form Paul Nicholls stable have a strong entry, led by another course and distance winner in Adrien Du Pont. He is a seven-year-old gelding by Califet who bounced back to form when beating Just A Sting by three and a half lengths. He has gone up 7lbs as a result.

Modus won at Cheltenham in October over two miles and has since been beaten at Ascot and Doncaster. He has yet to race beyond two and a half miles and there must be a question mark about his stamina. The drying ground will suit Romain De Senam, a winner at Taunton last month. He had failed to complete in two very competitive handicap chases at Cheltenham prior to that confidence-boosting success.

Rather Be up in distance at Kempton

Nicky Henderson relies on Rather Be who will be partnered by Jeremiah McGrath. Rather Be was second at the Cheltenham Festival last March but has been beaten in two big handicaps already this season. He appeared to be travelling well when brought down at Cheltenham in November but there were no excuses last time at the same track. He was always labouring behind Frodon and now tackles three miles for the first time.

Calipto won well at Ascot last weekend for Venetia Williams who is represented here by the hat-trick seeking Didero Vallis. He has won handicaps at Carlisle and Haydock in soft ground and is up 6lbs in the weights. Catamaran Du Seuil finished four lengths behind Calipto at Wincanton in January so that form looks strong. Dr Newland’s gelding has won over three miles but his best recent form has been over shorter distances.

Alan King’s hopes rest with Talkischeap, a seven-year-old gelding by Getaway. He got off the mark over fences when beating Theatre Territory at Doncaster in January. He started favourite to follow up here next time but was beaten by On The Blind Side. Double Shuffle is not an easy horse to catch right but he does seem to like it here at Kempton. He was runner-up in the King George VI Chase last season and fifth in the same event last time out, albeit a long way behind the winner.

Walt won by fifteen lengths at Taunton and was narrowly beaten off an 11lbs higher mark next time. He finished a long way behind Glen Rocco at Fontwell in November but both horses have improved drastically since. 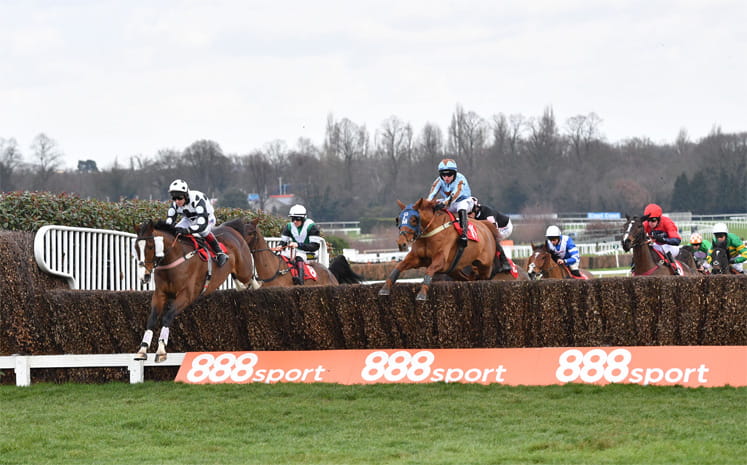 The 888Sport Handicap Chase is due off at 3.35 at Kempton on Saturday 23rd February and will be televised live on ITV4.