The feature race this weekend is the Group 1 2000 Guineas at Newmarket, the first Classic of the new flat racing season.

The 2000 Guineas is over a mile and is the first leg of the Triple Crown, completed by the Derby and St Leger. Nijinsky was the last horse to complete the treble although Camelot went close in 2012, finding only Encke too strong at Doncaster.

The betting suggests that O’Brien will be celebrating his ninth success this weekend with either Gustav Klimt or Saxon Warrior. The race clashes with the Kentucky Derby and jockey Ryan Moore has decided to travel to America to partner Mendelssohn. He would almost certainly have partnered Gustav Klimt at Newmarket, a smooth winner in heavy ground at Leopardstown last month. That was his first run since overcoming trouble in running to win the Group 2 Superlative Stakes in July.

He beat a promising colt in Imaging at Leopardstown, the pair finishing 11 lengths clear of the third horse. He should improve with that run under his belt and the better ground at Newmarket.

Saxon Warrior is unbeaten after three victories, culminating in a narrow victory over Roaring Lion at Doncaster in the Racing Post Trophy. He was headed that day but battled back bravely to win by a neck. He is currently favourite for the Epsom Derby and his pedigree certainly suggests that he will come into his own over middle distances.

O’Brien also runs Murillo, an unlucky third in the Coventry Stakes at Royal Ascot last summer. He then finished third to Beckford at the Curragh but is yet to race beyond six furlongs.

Elarqam the dark horse at Newmarket

Mark Johnston won the 2000 Guineas in 1984 with Mister Baileys. He is represented by Elarqam, by Frankel out of Johnston’s 1000 Guineas winner Attraction. Elarqam was workmanlike in beating Tip Two Win in the Group 3 Tattersalls Stakes here in September. The colt has pleased Johnston with his recent work and has plenty of scope for improvement.

Charlie Appleby has made a brilliant start to the season and Masar carries the famous blue of Godolphin here. He was a smart juvenile, finishing a respectable sixth to Mendelssohn in the Breeders’ Cup Juvenile Turf. He then ran on dirt at Meydan but failed to handle the conditions and laboured home in tenth place.

Appleby’s team were happy to put a line through that race and Masar showed his true worth when romping to a nine lengths win in the Craven Stakes. He left Roaring Lion trailing that day and his Guineas odds were slashed from 25-1 to 11-2.

Sir Michael Stoute has booked Andrea Atzeni to ride Expert Eye, among the favourites for this race after winning at Goodwood last summer. He flopped when finishing last in the Dewhurst Stakes next time and has proved difficult to settle. The Acclamation colt probably did too much early on in the Greenham Stakes when second to James Garfield.

Frankie Dettori has been released to ride James Garfield following a minor injury to John Gosden’s Without Parole. James Garfield is a tough and genuine colt but it would be a surprise if he didn’t find one or two to beat him in the 2000 Guineas.

Headway came from well off the pace to cut down Rufus King at Lingfield in March. That was his first attempt at seven furlongs and he stayed on very strongly. He finished runner-up in the Coventry last summer and third in the Gimcrack Stakes at York. Jamie Spencer has never won the 2000 Guineas, going agonisingly close on Hawk Wing in 2002. He will adopt his usual waiting tactics on this doubtful stayer.

Rajasinghe beat Headway and Murillo in last season’s Coventry Stakes at Royal Ascot. The son of Choisir has not been able to reproduce that form since but reportedly did an “extraordinary” piece of work recently. He is still available at 50-1 in places. 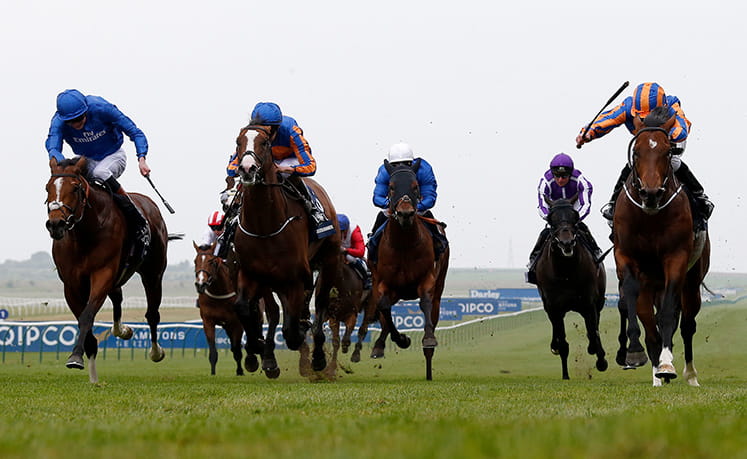 The 2000 Guineas is due off at 3.35 at Newmarket on Saturday 5th May and will be televised live on ITV.