The 1000 Guineas is the first fillies’ Classic over a mile and Aidan O’Brien is chasing a fifth win in the race and a third consecutive victory. Virginia Waters provided him with his first win in 2005 with Homecoming Queen scoring in 2012. Minding won in 2016 before Winter followed up last year. She was a fourth win in the race in five seasons for owners Smith, Magnier and Tabor.

The absence of stable companion Clemmie has left O’Brien’s Happily as the market leader. Her supporters will have to overlook her final outing when she finished last of fourteen at the Breeders’ Cup. The Galileo filly had previously won Grade 1 races at the Curragh and Chantilly.

She beat another O’Brien filly in Magical by a short-head in the Moyglare Stud Stakes. Happily then beat Olmedo at Chantilly over a mile in soft ground. She probably resented the fast ground at Del Mar and that form can be safely ignored.

I Can Fly was heavily backed to win the Group 3 Oh So Sharp Stakes here in October. She faded inside the final furlong to finish third behind Altyn Orda and Gavota. She then filled the same spot in the Leopardstown 1000 Guineas Trial and has more to do here. The O’Brien team is completed by Sarrocchi and Sizzling but both have plenty to find on the form book.

Godolphin will be doubly represented here with Soliloquy and Wild Illusion. Charlie Appleby regarded the latter as the stable number one prior to Soliloquy’s impressive win in the Nell Gwyn Stakes last month. The daughter of Dubawi was always in command, repelling Altyn Orda by a length and three-quarters. Connections have stumped up the cash to supplement her for this race rather than target the Irish 1000 Guineas.

Wild Illusion is a Group 1 winner in France, also by Dubawi. She sprang a 25-1 surprise when beating Polydream in the Prix Marcel Boussac over a mile. She has more stamina in her pedigree and it would be no surprise to see her develop into an Oaks filly.

Altyn Orda needs to improve to reverse the Nell Gwyn form and Dan’s Dream represents the in-form Mick Channon stable. She won the Fred Darling Stakes at Newbury to earn a supplementary entry for the Classic for her syndicate of owners which includes Ian Botham.

Karl Burke saddles Laurens, winner of the Group 1 Fillies’ Mile here in October. She just got the better of September that day. That followed an equally gutsy effort when beating Dark Rose Angel at Doncaster in the May Hill Stakes. She is another filly who looks certain to stay middle distances later in the year.

Anna Nerium has twice stunned punters for the Richard Hannon stable. She started at 40-1 when winning a Group 3 at Salisbury in September. She was well beaten next time but bounced back to win at 25-1 in the European Free Handicap. She was officially rated 100 that day so theoretically has to find another stone to win this. Liquid Amber won the Group 3 Flame of Tara Stakes at the Curragh by five lengths. That was an impressive performance and she could prove a lively outsider for the McCreery stable. 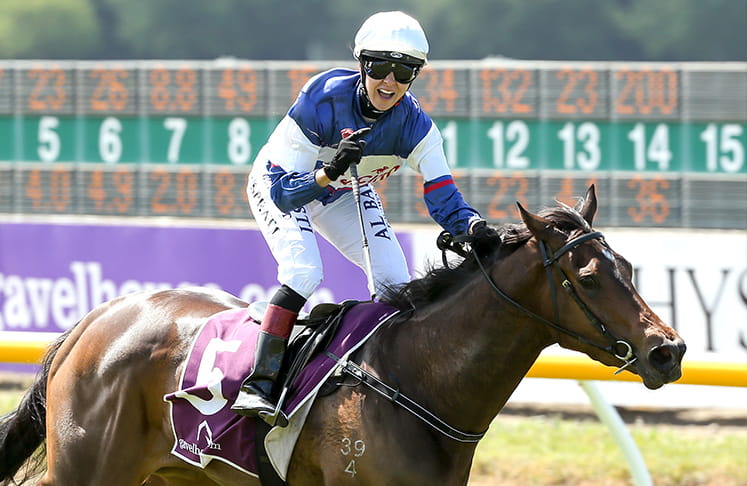 The 1000 Guineas is due off at 3.35 at Newmarket on Sunday 6th May and will be televised live on ITV.